Claudia Conway: 'So, Kellyanne, You're Going to F***ing Jail' [VIDEO]

On Monday, Claudia Conway, daughter of former Trump advisor Kellyanne Conway, accused her mother of leaking a topless photo of her on Twitter and declared that she is going to “f-cking jail.”

On Tuesday, Claudia began singing a different tune. She is now insisting that Kellyanne would “never intentionally do that” and stated that she thinks her mother was hacked. 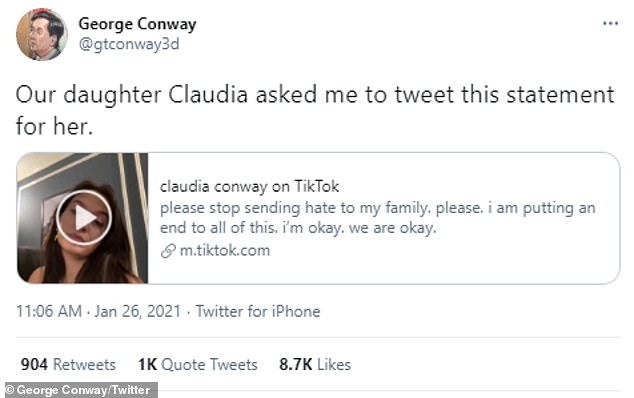 According to screenshots posted across social media, Kellyanne’s official account is seen to have shared the nude image of her teen daughter using Twitter’s newly launched Fleets feature, which deletes posts after 24 hours.

Claudia leveled the accusation to her 1.6 million followers on TikTok.

“Apparently that’s real and here’s what I guess happened,” Claudia said. “The picture’s from months ago and I’m assuming that when my mom took my phone — any time she’s taken it because she takes it all the time — she took a picture of that, so that was on her phone.”

“And I guess she accidentally posted it, or somebody hacked her,” she continued. “But nobody would ever have any photo like that ever. So, Kellyanne, you’re going to f–king jail.”

Claudia added, “My mom deserves to go to jail.”

The post has since been deleted, but not before users took screenshots.

In other deleted TikToks, Claudia — who in the past has publicly warred with Kellyanne and her father, George Conway — urged her followers to report the photo.

“My mom deserves to go to jail,” she said in the videos that reappeared on Twitter. “That’s unreal. She’s the only person that has it.”

Reached by phone Tuesday, Kellyanne, who was an adviser to former President Donald Trump, said she was “sitting here with Claudia” before saying, “We have no comment” and hanging up.

A short time later, the outspoken teen took to TikTok again, insisting that she believed her mother was hacked and begging people to stop contacting law enforcement over the alleged photo.

“Yesterday when I was made aware of the situation I was distraught and very, very upset and I acted irrationally and impulsive and it is something I do regret,” Claudia said.

“I know that my mom would never, ever post anything to hurt me like that intentionally and I do believe she was hacked. I want to apologize for making all of this public.”